In my previous blog posts, I talked about some of the most essential best practices you should have while working with the Azure Logic App: When designing a business process, one of the most important design considerations you need to keep in mind is what happens when things go wrong. By default, Logic App allows us to handle errors by using the Configure run after settings at a per action level. This is what common programming languages like C# do.

The same default behavior happens on Logic Apps. An upcoming action will run if the current one is successfully finished with success. However, in Logic App we have the possibility to easily change this behavior and, kind of, implement a try-catch per action level.

As you see in the picture below, by default the upcoming action will run if the previous one is successfully finished with success: And this behavior makes all sense.

Note that you cannot configure the run after settings for the first action, in this case, the FA-Monitoring-APIConnections-Report action because that depends on the trigger execution. And that makes sense.

Now let’s assume that we add a Logging shape to track some information – there are better ways to do this! This is just a POC sample.

Normally these tracking actions shouldn’t break your business workflow if something gets wrong with them, let’s say the service was offline. Should we miss an invoice just because we can’t do tracing or logging? No.

To avoid that we can on the action bellow, in our sample, the Initialize var with HTML body email template action change the default run after setting. And to do that we should:

So now the Initialize var with HTML body email template action will be executed even if the Logging sample action fails, give a timeout, or is executed with success as we expected. The important is that will not impact the critical logic of your business workflow.

And you can apply this strategy to all shapes. Use it carefully and according to your business logic.

This can be perfect for a simple business process, but in more complex or real enterprise scenarios, there will be situations where we want to handle errors from multiple actions in a single place and implement specific tasks if a failure occurs.

As I mentioned in #4 Using Scopes, most users tend to think that Scopes is a strange action that is not there to do anything other than to help you organize the business logic a little better inside LA, but that is not true. The reality is that scopes have many functionalities:

And it is this second capability that allows us to implement advanced error handling capabilities by:

Once again, this is quite normal on traditional programming languages like C#, where we use a try-catch or try-catch-finally statements:

The try-catch-finally statement handles some or all of the errors that may occur in a block of code. Errors can be coding errors made by the programmer, errors due to wrong input, and other unforeseeable things.

Note: The catch and finally statements are optional, but you need to use one of them (if not both) while using the try statement.

To implement a try-catch or try-catch-finally statements we need to: 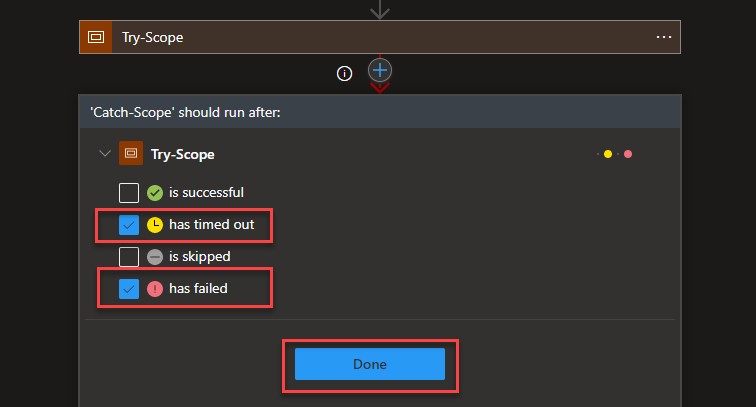 With this, we have implemented a try-catch statement. Now if we want to implement a try-catch-finally statement we just need to: 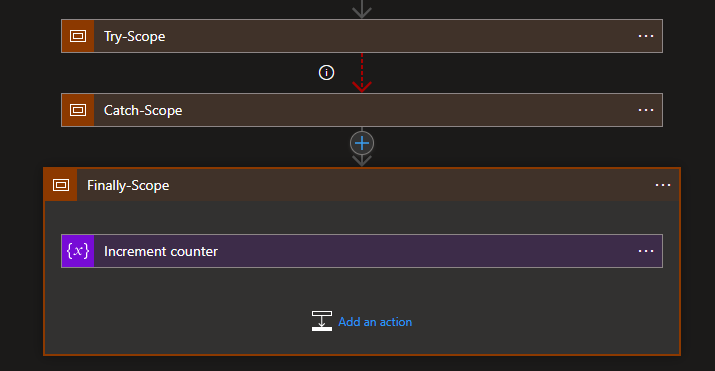 And there you go we have a try-catch-finally statement implemented.

Important note: Even inside a Scope we can implement kind of, a try-catch per action level that we explain at the beginning of this post.