Microsoft has made the Logic Apps General Available (GA) a few months ago (end of July 2016) and this Azure service has evolved ever since. Each month the product group responsible for the service, Jeff Hollan and Kevin Lam together with Jon Fancey, present updates through a YouTube channel. The latest update (26 January 2017) included for instance, browsing enhancements for connectors, switch case condition (similar to C# switch), JSON Parse to tokenize properties, new SaaS connectors, operations and upcoming new features.

Besides the evolution and thus an increase in maturity, the adoption of Logic Apps rises. I myself and a colleague at Macaw have built and deployed a Logic App solution for a customer in production that runs for over a month now without any issues. And we are not the only ones as there are many more customer cases. Businesses start seeing the added value brought by Logic Apps with its connectors, short lead times and no requirements for servers. Logic Apps run in Azure and are Server less, i.e. you can have an enterprise ready integration solution running in the cloud for low cost and maintenance (TCO).

This blog post will provide some additional insight on the power and value of Logic Apps. It can be seen as a game changer concerning integration in the cloud. Logic Apps fall under the moniker integration Platform as a Service (iPaaS), which is what actually is, and I will be quoting Wikipedia here to emphasize this:

“The most common cloud-based integration service model is iPaaS (Integration Platform as a Service), which is a suite of cloud services enabling customers to develop, execute and govern integration flows between disparate applications. Under the cloud-based iPaaS integration model, customers drive the development and deployment of integrations without installing or managing any hardware or middleware.”

You provision a service/host, define the logic and execute in Azure. And iPaaS service is characterized as (according to Wikipedia):

In this blog post, I would like to share another use case or scenario of a Azure Logic App to demonstrate its value and some of the new features. We will build a scenario to demonstrate API integration, where the focus is on connecting different API’s. One common reason for doing this is to automate more of a business process. And Logic Apps can facilitate the integration of one or multiple API’s. A Logic App will be a composite service that, based on a set of parameters, will provide a result containing weather and event details. The parameters will be a city for which you like to know the details about the weather the coming 7 days and events in that time frame. The Logic App will call two API’s hosted in API Management, and combine the result of each call into one single response to the client. The complexity of calling the API’s is abstracted away in API Management, and the composition of the response of both API’s is done in the Logic App.

The API’s are generally available API’s, which will be abstracted away from the Logic App by creating a proxy in API Management. In API Management, we will create an API to add operations to them and tie them to the actual API and its operations combined with policies to manage security, and other quality aspects. We provide a name for the API, set the Web service URL (endpoint of the API) and can observe the actual WebAPI URL i.e. API Management instance name with a standard DNS addition .azure-api.net + suffix. The WebAPI will have an operation daily that connects to the daily forecast operation of the WeatherAPI (api.openweathermap.org) and its parameters. 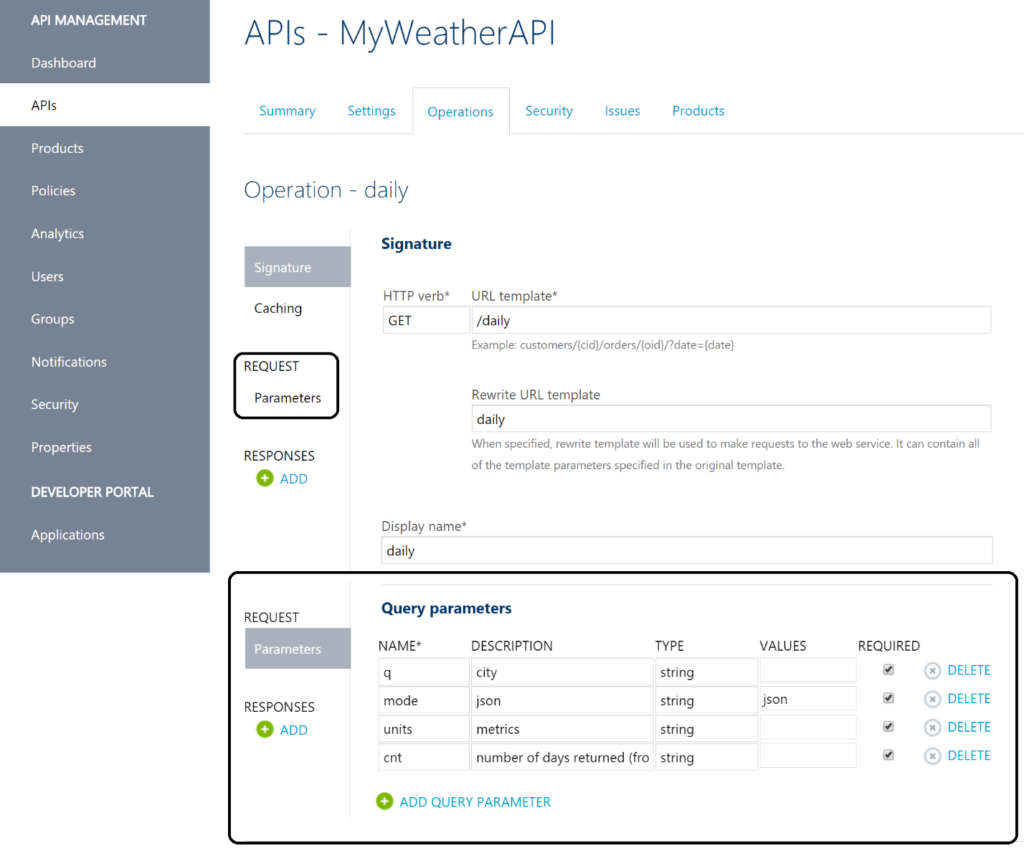 A policy will be applied to the operation, to add an APPID key in the query parameters.

The policy ensures that the operation can be executed, as the APPID is mandatory in the query parameters. However, the consumer of the Azure API is unaware of this as it is abstracted away through the policy. The same process will be done in the event API (api.eventful.com).

An HTTP function will merge the two bodies i.e. JSON strings into one and currently, there is no action for it. Hence, we will build a function that will accept a string with two JSON bodies in them. In general, when it comes to certain operations on your data within a Logic App, you will notice that a function can help facilitate in having that specific capability like merging JSON strings or perhaps date time manipulation. In our scenario, we’ll merge the two JSON responses to one using a function that can be called through HTTP. It is one big string that will be sent to a function, and with a WebHook type of function, it expects a JSON! An HTTP Function can accept a string, manipulate it and return a JSON as shown below.

The two JSON response bodies are concatenated together when calling the function, which means the braces }{ need to be replaced by a comma ‘,’ to form a JSON again.

The Logic App itself is a service, i.e. the infrastructure is in Azure and once provisioned you can define your logic. Logic in this context is a definition with a trigger and one or more actions. To define the trigger and action we will have a designer available to add the trigger followed by actions and/or workflow specific actions i.e., for instance, a condition, case or scope. The switch case is one of the new additions. 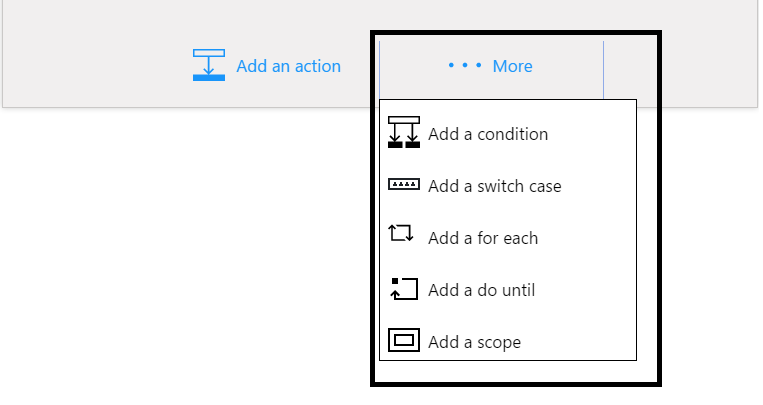 The Logic App definition of our solution will have a HTTP request trigger followed by an action to consume the weather API and later the event API. It contains a switch to support the possible responses from the API i.e. HTTP status like 200, 400 or other. And based on those types of responses you have a switch in place to control the various outcomes of your Logic App. A 200 will mean proceed to call the next API or create some sort of response to the caller of your Logic App. In status 200 branch, a JSON parse will be used to tokenize the JSON response from the weather API. The JSON parse is another recently added action in Logic Apps as discussed in the introduction. Subsequently, the event API operation search will be called and if the HTTP status is 200, the left branch will call the function through HTTP presenting both response (bodies) to create a JSON response, which will be returned to the client as a response. If the call to search fails, the right branch will return a custom response. To test the Logic App, we will use Postman to send a request (POST) with a payload. This payload will contain a city, start- and end date. In the Azure Portal, we can observe the detail of the Logic App run and drill down into each of the actions. And this is a great feature of Logic Apps, you can see what happens and even resubmit, which is very useful to investigate where failures happen or change the flow in the designer and then resubmit. You do have to use a client like Postman to resubmit! The Logic App provides monitoring capabilities in its blade like metrics. You can monitor your runs and select metrics to see how your Logic App definition i.e. flow performs. Metrics are not the only feature within the monitoring section of the Logic App. You have diagnostics, and logs you can examine. Thus, its adheres to the characteristic of “Presence of integration management & monitoring features” of iPaaS.

Logic App can add value to the business with automating processes, which are agile by the nature of this Azure Service. A process can be created and operational in hours instead of days, can be changed on the fly or replaced by a new process i.e. Logic App. Logic Apps will bring IT closer to the business than ever before. The tremendous number of connectors lowers the connectivity barrier or API’s can be tied together as shown in this blog post as a composite service or to create a business flow/process (orchestration). However, the power and agility of Logic Apps will also bring the risk of losing grip on the processes if everyone can easily build these flows and run them, i.e. you will need some form of governance to prevent the business completely go wild with this service. With a great deal of flexibility or agility and lower barrier to build integrations some form of governance will necessary to prevent overlap, over consumption, and conflicts.

Logic App can be viewed as a counterpart for BizTalk Server, a server product from Microsoft suitable for application integration. In BizTalk business processes can be automated by connecting two or more applications or services. In this blog post we have seen that two API calls are combined to create one response. However, Logic Apps with its various connectors can do the same thing as we did with BizTalk on premise. With BizTalk, we can create a composite application similar to what we have shown in this post by providing a common front end to a group of existing applications. Hence the value BizTalk provided on premise is now available through Logic Apps. The most important difference is hosting and pricing i.e. cloud versus on premise and license fees versus pay as you go.

Logic Apps can be called directly through HTTP and thus are exposed to world wide web i.e. everyone, which means it will need some sort of security. Out of the box is that a signature (SAS) is bound to the endpoint and is required for clients to provide in the request. Some see this as a form of security by obscurity and to further enhance security you can use API Management. API Management abstracts away the security and you can enforce other means of security to access the endpoint i.e. OpenID or OAuth 2.0.

Supporting the solution such as the one described in this post can be a challenge since you need to monitor or keep an eye out for the API keys at API supplier i.e. the weather API and event API, key(s) for the function and SAS signature in the Logic App endpoint, and the consumption of the Logic App. Each action in Logic App is an Azure consumption and has a price, which can be monitored easily through observing the resource costs in a resource group; it is operational costs of executing Logic Apps. You have to factor in notifications and alerting in your solution, which is easy to set up using alert rules on your resource.

You can learn to work the service yourself, learn more about or express your wishes:

One thought on “Building a composite service using Logic Apps”