After months of preparations and work behind the scenes, it’s time for INTEGRATE 2017 – the premier integration focused conference at Kings Place, London. This blog covers Azure Service Bus announcements from Microsoft Pro Integration team and additional interesting details from #Integrate2017.

Dan Rosanova, Microsoft Principal Program Manager, started off his session by wowing the audience on the Azure Messaging numbers. Those numbers are simply awesome! 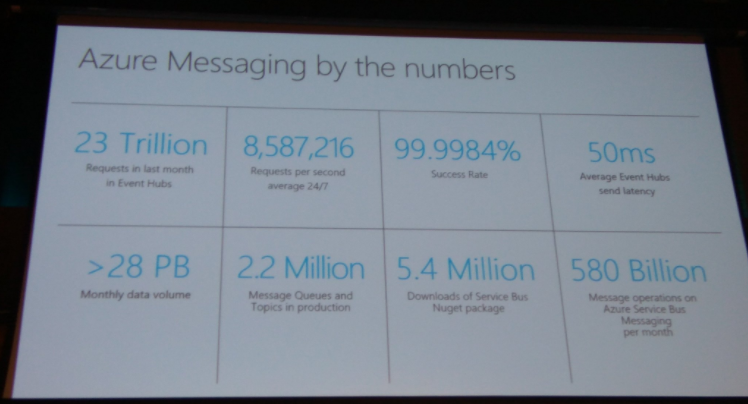 Dan made the mention that customers can make use of Serverless360 to monitor their Azure Service Bus resources and keep a watch on the failure rate. In the above screenshot, Dan says the team receives easily about 28 million failures per week and Serverless360 can help customers to keep track of these failures and fix them at the earliest.

(Note: ServiceBus360 has been re-branded as Serverless360) Dan then gave a brief history about Messaging, how it was, and how the landscape is today. Today’s messaging landscape involves – Microsoft is clearly the leader in the messaging space. Dan spoke about the concepts of Event Hubs, Messaging as a Service (MaaS) – Queues and Topics, features of Service Bus, Relays.

Shubha Vijayasarathy, Microsoft Program Manager, started off her talk talking about the 3 main S’s the Product Group is focusing on to build their solutions that are –

Shubha then deep dived into the concept of Event Hubs. Shubha made the mention that majority of Event Hubs customers are writing their stream to a persistent store mainly for long-term storage and batch processing of the information. For achieving this, the Event Hubs team are reintroducing the concept of Archive, but with a better name called CAPTURE. Event Hubs CAPTURE allows you to batch and real-time processing on the same stream. This feature will be GA on June 28, 2017, across all Azure regions. You can stand up your own Event Hubs Clusters in less than two hours. You can monitor your cluster health, and with this model, you have the option to start small and then scale as you go. This feature is currently in Private Preview and will soon be available in the Public Preview (by September). (Note: ServiceBus360 has been re-branded as Serverless360)