This blog will give you an overview of the session “AI/ML, Integration and Monitoring” at the Integrate 2020 Remote event by Steef-Jan Wiggers, Microsoft Azure MVP.

This blog will cover the introduction to AI/ML, Azure services used to implement AI, integration and monitoring using AI and the importance of data.

Steef-Jan explained how humans started to use data starting from 4000BC when wheel was invented. It was followed by the invention of printing press in 1439. Internet came into picture in 1980’s when human started to use data. Cloud was invented in 2000s which broadened the scope of data. Now currently we are using AI/ML to deal with data. Custom software solutions make use of the data to differentiate between the business of customers. Data is also used in Internet of Things. The data can be used to decide on business solutions. Data will also be used in Health care products in future using AI and ML.

“Data is the heart of Solution to any problem” In traditional programming, we will provide the input and the rules to find out the output to the program and we will get the data which is the answer to our question which is provided as input.

In Machine learning, we provide both the answers and data to the system which in turn will frame the rules. 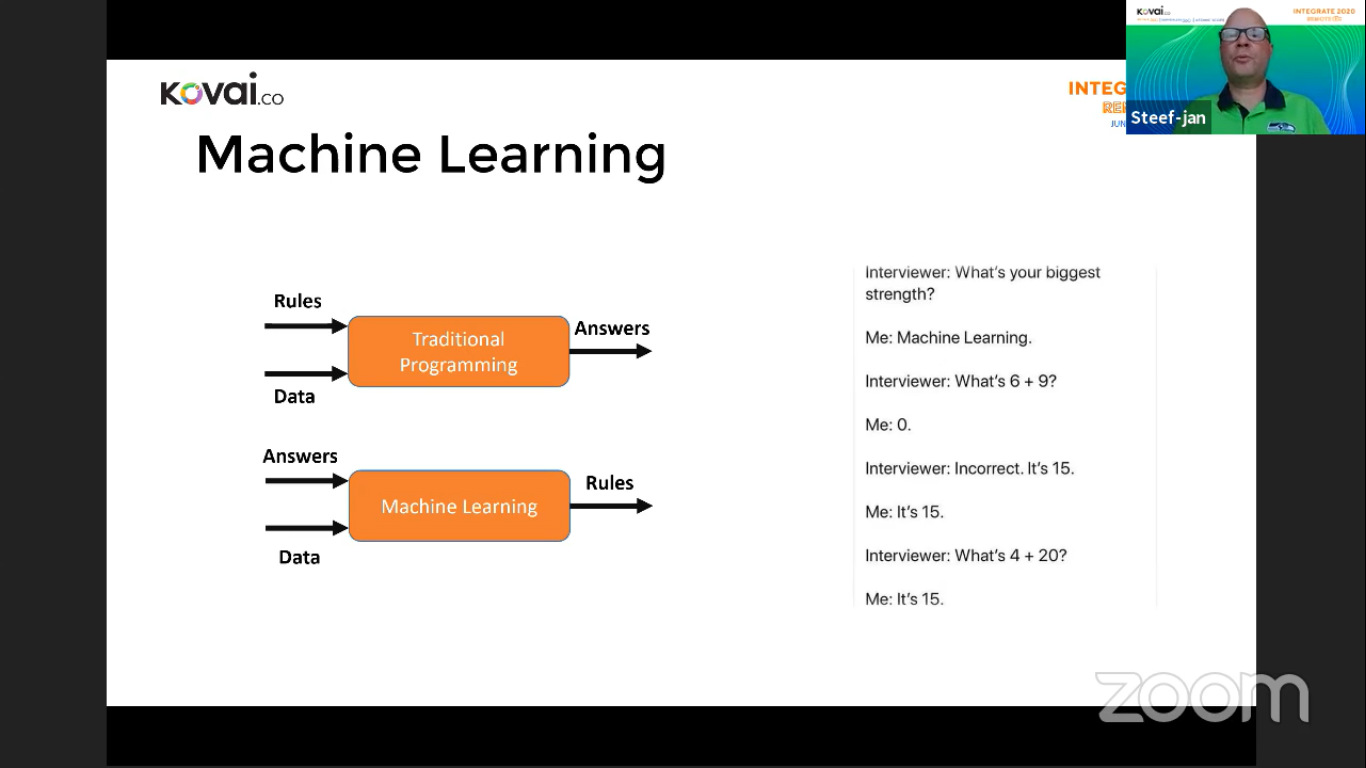 Azure Machine learning provides the tools needed by the developers and data scientists to solve their problem. Some of the tools are as follows.

Steef-Jan briefed the Smart Building Project installed in his office where there are several IoT devices installed in different locations within the office. The IoT sensors will ingest the data to the gateways. The scheduled Azure function app in turn ingests the data to the telemetry. This is again handled by the stream analytics job. The output data from the stream analytics job can be visualized in the Power BI dashboards. The data is also stored in Azure Blob storage for further reference. They import the data from the Azure Blob as CSV file and transform them using the Apply SQL Transformation Task to get the relevant data. 70% of the data is used for creating rules and the remaining 30% is used for testing purposes. For this transformation they use the Booted Decision trees regression using a parameter range of 5 for all parameters.

Since data is the important part of machine learning, it is required to make sure that we follow the privacy and regulations while manipulating the data.

“The amount of data used must also be considered in machine learning because unwanted data may result in unwanted computations which in turn reduces the performance.”

We should also make sure that the use of Machine Learning in a solution to a problem solves any business use case.

Artificial intelligence is the capability of a machine to imitate intelligent human behaviour. Through AI, machines can analyse images, comprehend speech, interact in natural ways and make predictions using data.

Steef-Jan has used some Nuget packages to consume these APIs. He uploaded his image in the App and used the above AI providers.

Microsoft Cognitive Face API and AWS Recognition provided the information about the age, gender etc based on the image uploaded. Google computer vision API also provided some basic information on the uploaded photo. Following are the considerations for AI

Steef-Jan sighted few projects which have won in the Microsoft competitions. Those projects were based on AI and ML. He also mentioned that “Artificial Intelligence Market is like to reach USD 390 billion by 2025”. Some azure integration services like Logic Apps, Service Bus, API Management and Event grids can be used along with Machine Learning and AI to solve some business problems. A demonstration was done using Azure cognitive services along with Logic Apps. The current COVID19 scenario was handled in the demo. A Logic app is triggered whenever someone posts with #COVID19 in twitter. The post is then analysed by the cognitive service sentiment analysis which provides a sentiment score. AI/ML can be used in monitoring projects where there is a need to periodically observe and check the progress of something. Monitoring also helps in keeping the track of events or data. A demo was done using AI and ML to process the images of license plate. The flow of data here is as follows. The session was concluded with the recap. Monitoring is one of the key main aspects of Machine Learning. Machine learning can be used along with other Azure integration services to solve the business problems. Microsoft Azure offers some free AI and Machine Learning Services which can be used for learning. Steef-Jan concluded by saying that though Machine learning may seem like a fun but there is a big picture. Ranjith started his career at Kovai.co and works as a Junior Software Engineer. He lives with the passion - "Don't Give Up". View all posts by Ranjith Eswaran